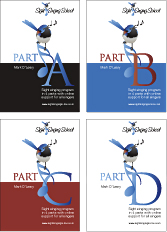 Released in 2007, this CD was recorded after the choir’s tour to Western Australia, Singapore & Thailand. It comprises music from the choir’s 2006 & 2007 repertoire and includes a few Paul Jarman favourites published in the YVM Choral Series including Far Away our Home, Let Go the Long White Sails and Time Enough to Give. The Cd is named after Imogen Heap’s wonderful Hide and Seek which is recorded on this release.